From the Latin word “aboriri” which means “to perish” [1], abortion refers to discontinuation of pregnancy by withdrawing the embryo or fetus from its mother’s uterus before the age of viability (around 24 weeks of gestation).

Methods and Procedure of Abortion

Abortion can happen with medications alone. This type of abortion is preferred by women in early weeks of gestation who do not want to undergo surgery. The following medications are used for medical abortion:

Mifepristone (Mifeprex) is a medication prescribed by the physician during early pregnancy. It is taken per orem (by mouth). On the first day, you will be asked to take three tablets at one time. Have a follow-up check-up after two days for the physician to determine whether or not the pregnancy is terminated. If not, your physician may ask you to take two tablets of Misoprostol (Cytotec). [5]

Mifepristone should not be taken without the doctor’s guidance as it may lead to more problems than you can imagine. FDA approves this drug for use until 49 days after the last menstrual period [6].

Misoprostol (Cytotec) is used with mifepristone if the latter can’t abort the pregnancy by itself. Misoprostol serves as an aid by inducing labor. [7]

This drug is typically given to cancer patients. You might be wondering how this can be used to abort pregnancy. Cancer drugs attack fast growing and fast multiplying cells, the cancer cells. In a pregnant woman, the target is not the cancer cells, rather the fast growing fetus inside the mother’s womb. Since the fetus is attacked by a highly toxic drug, it dies. Misoprostol will then be used to induce labor for the fetus’ expulsion.

One problem that can occur when taking these medications is incomplete abortion. This is the incidence wherein the products of conception are not expelled completely. Some parts might stay on the uterus. This is dangerous. It can cause hemorrhage on the mother’s part. Furthermore, it could poison the mother’s body. If there is proven to be an incomplete abortion, the woman should undergo surgery to remove all the fetal parts.

Suction aspiration is the most common surgical abortion performed during the first trimester. Once the cervix is dilated, a suction tube is inserted into the uterus and the vacuum’s power will empty the uterine contents into a collection jar or bottle. [9]

D&C is similar with suction aspiration, but instead of using a vacuum, it requires the mechanical use of hand’s control with a curette. The cervix will be dilated. Curette will be inserted into the uterus and it will be used to cut the fetal parts. Products of conception will then be scraped from the mother’s womb. [10] 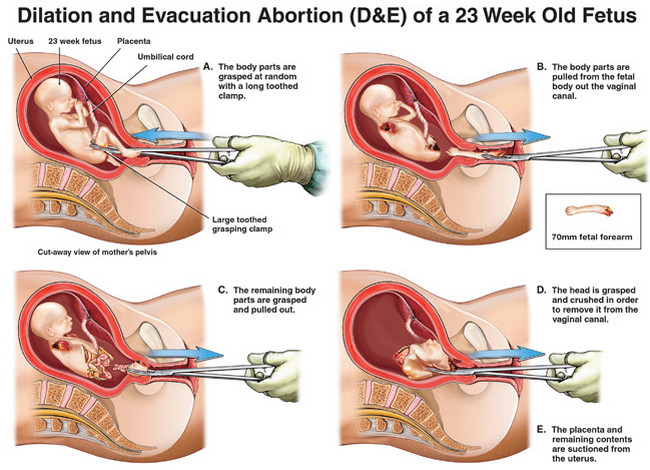 D&E is an abortion method performed during the second trimester. The cervix will be dilated. A grasping forceps is used to remove the fetal body piece by piece. The head will not be able to pass through the cervix as a whole so it has to be crushed. All products of conception must be removed. [9]

D&X is performed during third trimester of pregnancy. Like the other methods, the cervix will be dilated. Forceps will be inserted into the mother’s womb to grasp the baby’s feet. The body will be pulled out except for the head. The physician will insert scissors into the skull to widen it and a suction tube will suck out the baby’s brain. This will crush the head. Then all of the products of conception will be removed. [8]

Like D&X, hysterectomy is also done during the third trimester. This is the abortion method that does not require cervical dilatation. An incision is made on the mother’s abdomen instead. The umbilical cord is cut inside the mother’s abdomen, thereby also cutting the baby’s access to oxygen. [9] Since the baby is not yet mature to breathe on its own, the baby dies of asphyxia (lack of oxygen). And then the baby is taken out.

The fact that in abortion, a human life is being purposely terminated and these methods of killing the baby are the reasons why abortion is too controversial. It’s been such a long time since the topic has become a very huge issue. This will continue to be a debatable issue in over the generations to come.

What To Do and Not To Do After Abortion

Though different countries have different laws and constitutions, the legal aspects of abortion are generally based on human rights and safety.

Below is a map of the world with the color coded legends which determine the country’s legal stand when it comes to abortion.

Countries where abortion is legal to protect the mother’s health

Now that you know what happens to the baby during abortion, couples particularly women, should be responsible enough to take the consequences of your actions. Most cases of abortion are due to unwanted and unplanned pregnancy. So who suffers after you decide to abort the pregnancy? It’s your baby. That innocent beautiful creature is who suffers the most. Abortion wastes a precious life.

Abortion should only be done if it’s a matter of life and death. If the pregnancy is killing the mother… well, it’s really hard to choose between the life of the mother and the baby. Ethically and morally, I am in no position to give an advice with regards to whose life should be saved. But practically, the mother’s life should be saved because she can make more babies in the future, unless her condition does not permit her to. 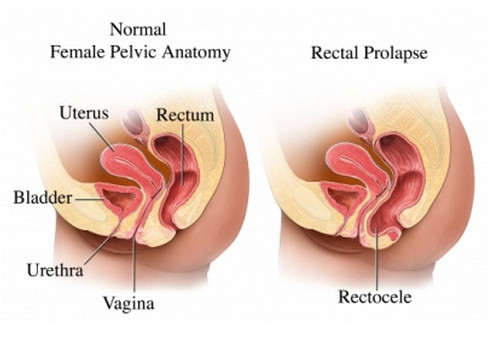 How To Tell If A Hymen Is Torn or broken