In human anatomy, the appendix is part of the human digestive system.  It is a finger-like, 3-4 inch organ where the small intestine and large intestine meet and is located in the lower right of the abdomen. 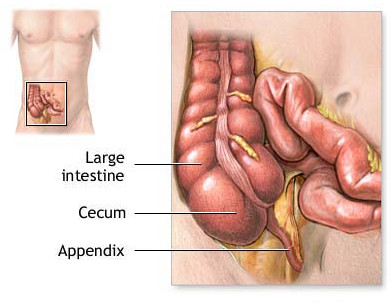 Every individual is unique and with that uniqueness means that the placement of organs and its alignment slightly differs. A medical condition called situs inversus is the term used when the person’s organ or most of the organs are located on the opposite side thus in such condition the appendix is on the left side.

Many thought of the appendix to be of no function. Although it is designed that every organ of the human body has certain functions but in the case of the appendix, its functions has not yet been established. With this, many are opposing to the idea to remove the appendix surgically as it is considered by others as a ‘useless organ” because it has not been observed to have a function in the human body and removing it does not cause any problems in health.

In the past, it is believed that the appendix serves as storage for bacteria that reboots the digestive system following an illness or a disease such as in diarrhea and other digestive related conditions.

Symptoms of Appendix are but not limited to swelling and abdominal pain, nausea and vomiting, grumbling appendix, loss of appetite, difficulty passing gas and or changes in bowel movements such as when constipated or experiencing loose bowel movement.

Knowing the location of one’s appendix is very important so as to know the cause of the abdominal pain that you are experiencing.  If for any other reason that the abdominal pain is located in the right lower quadrant, there is a possibility that it is appendicitis.

To know if it can possibly be a case of appendicitis, when abdominal pain is felt, one must push the spot where it hurts the most in the abdomen. Rebound tenderness is when upon letting go, the pain is worst than when pushing it. If rebound tenderness happens, then it is likely to be appendicitis.

Another way of knowing is when it hurts so badly when you lie on your back and lifting your right leg without bending one’s knees.

The pain experienced by an individual who is or who may be suffering from appendicitis is felt all over the stomach or the abdomen. It can also be felt only on the navel or only on the upper abdomen. The pain is not usually severe usually begins at the center of the abdomen, and as the inflammation progresses it begins to be localized only on the right lower abdomen and as time passes without treatment; it can spread to others areas of the abdomen.

Appendectomy (appendix removal), an appendix operation, is the only source of treatment during appendicitis to prevent infection of other organs and burst appendix as well.

If the physician is not 100% sure of the condition, whether or not appendicitis or not, he will prescribe an antibiotic that would help fight against infection if there are any but does not cure appendicitis.

The two most common appendix problems are appendicitis and carcinoid syndrome.  Appendicitis is the inflammation of the appendix. For no apparent reason and unknown cause, the appendix becomes inflamed, that can lead to infection and furthermore it can rupture if not treated. The inflammation causes severe and unbearable pain located in the Right Lower Quadrant (RLQ) of the stomach that is oftentimes accompanied by nausea and vomiting.

On the other hand, Carcinoid syndromes also known as Carcinoid tumors are the tumors of the appendix. These tumors secrete chemicals that can cause wheezing, diarrhea and flushing. As with any other tumors, they can also spread (metastasize) to other parts of the body.

As mentioned above, carcinoid tumor is one of the most common types of problems of the appendix. It is common is women than men. These tumors are also called neuroendocrine tumors because they create and then release the hormones into the bloodstream.

Appendix tumors do not usually present symptoms but only after metastasis has occurred thus symptoms appear.

Risk factors for developing Carcinoid tumors are unknown. Analysis of it being genetically linked has not yet been proven as well as environmental toxins are left unidentified.